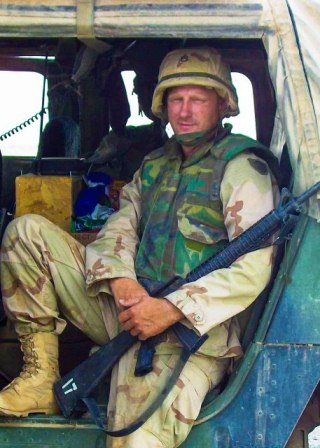 Ken graduated from Bismarck High in 1980 and then returned to the school system in 1989 where he was employed as a custodian. It was at this time the Ken discovered his aptitude for working with computer technology and his love for working with kids. A common sight was to see Ken assisting students with their math in the hallways between classes. Ken knew that teaching was what he wanted to do.

In 1989 Ken joined the North Dakota National Guard for assistance in furthering his education and to pursue his dream of becoming a teacher. Ken attended the University of Mary during the day and continued to work for the Bismarck Public Schools as a custodian and later as a computer/electronic technician. He had really found his place in the Bismarck Public Schools technology department.

Ken earned his Bachelor of Science degree in mathematics with a minor in secondary education from the University of Mary in December 1991. He continued his evening work as a custodian while teaching school in Wing, North Dakota and Saint Anne School in Bismarck.

Ken’s National Guard Unit was deployed to Iraq in February 2003. Ken was proud to serve his country with the 957th Multi-Role Bridge Company. On January 24, 2004 Staff Sergeant Kenneth Hendrickson lost his life near Fallujah, Iraq.

Ken was a man of integrity and honor, a fun-loving family man, a lover of music and computers; a man with a passion for learning. It is with pride the family presents the Kenneth Hendrickson Memorial Scholarship.